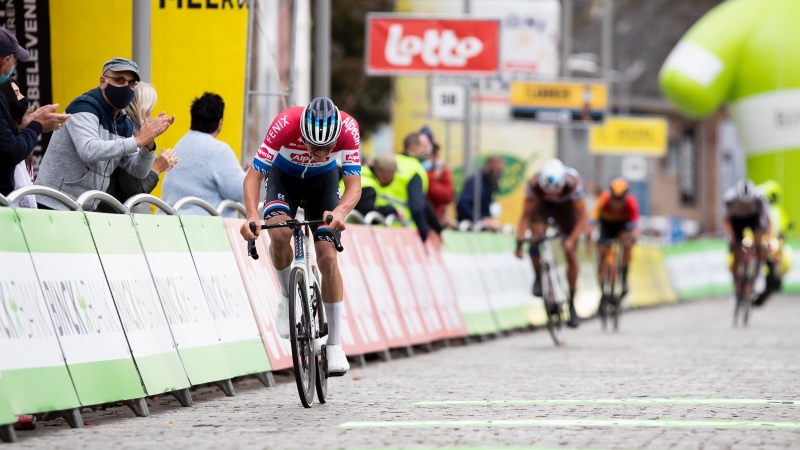 Mathieu van der Poel has dominated the final stage of the 2020 BinckBank Tour. Van der Poel rounded off an impressive 50 kilometre solo effort on his way to the double: the stage and overall win.

The final stage of BinckBank Tour saw the riders climb the infamous Muur and the Bosberg four times. On the second ascent of the Muur Mathieu van der Poel broke open the race with a splitting attack. Along with Florian Sénéchal the Dutch champion bridged the gap from the peloton to the eight-rider breakaway. On the next ascent of the iconic Muur Van der Poel dropped his colleagues one by one, steaming ahead alone with 50 kilometres to go.

Van der Poel soon amassed a 1m30 lead, while in the peloton leader Mads Pedersen tried to put together an organised effort to bring down the gap. But the Dane was hauled back by his compatriot Soren Kragh Andersen and lost ground in the finale.

On the final lap four riders managed to join forces in the chase on Van der Poel. Kragh Andersen, Stefan Küng, Oliver Naesen and Sonny Colbrelli managed to get the Dutchman in their sights, putting Van der Poel under serious pressure. Van der Poel struggled in the final kilometre, but managed to win the stage by four seconds ahead of Naesen, Colbrelli and Andersen.

The narrow gap proved to be enough to beat Kragh Andersen to the overall win as well, Van der Poel finishing eight seconds ahead of the Dane and 23 seconds clear of Küng. In the Lotto points standings the win went to Pedersen, while Kenneth Van Rooy won the Super 8 Combativity classification.