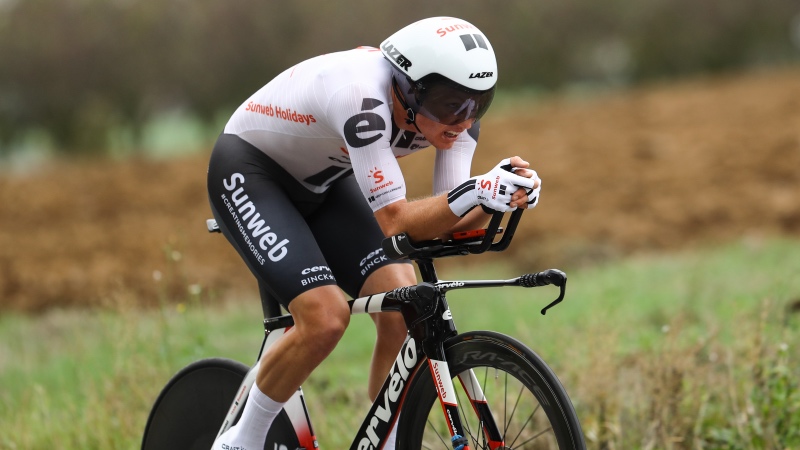 Soren Kragh Andersen has conquered the fourth stage of the 2020 BinckBank Tour. The Dane won the time-trial in Riemst, being the only rider to stay below the 10-minute mark on the short 8km test. His compatriot Mads Pedersen retains the overall lead by virtue of a solid fourth place.

The fourth stage of the BinckBank Tour was set in the beautiful border region of Belgium and the Netherlands. The short 8km course featured a nasty little climb right from the start, the Slingerberg. With eight hairpins in 700 metres, the climb can be seen as a Belgian miniature version of the famed Alpe d'Huez.

Nathan Van Hooydonck confirmed his Tirreno form by putting down a first marker, but the young Belgian's time was quickly bettered by Sweden's Tobias Ludvigsson. Jannik Steimle, one of Deceuninck-Quick Step's promising talents, and fellow German Jasha Sütterlin then improved on that time.

However, the German duo was soon swept aside by a Danish whirlwind. Soren Kragh Andersen blew away the opposition. Kragh Andersen, who also won a stage in the past Tour de France, was the only rider to dip below the 10-minute mark and beat European time-trial champion Stefan Küng by six seconds. Another Swiss rider, young Stefan Bissegger took a surprising third spot. Mathieu van der Poel (12") was fifth, Yves Lampaert (20") was the first Belgian in eighth.

In the overall battle Mads Pedersen remains in the lead after finishing fourth. Kragh Andersen is now a close second just seven seconds behind, followed by Küng (13"), Bissegger (14"), Van der Poel (17") and Philipsen (19").