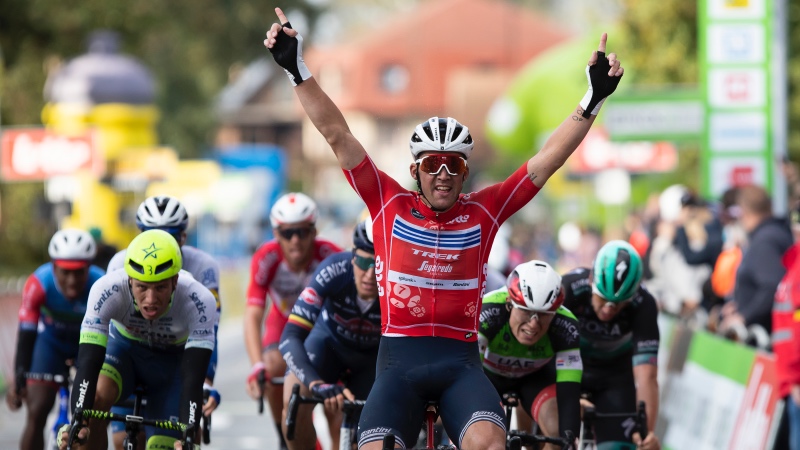 Mads Pedersen has won the third stage of the 2020 BinckBank Tour. The Danish former world champion won the bunch sprint in Aalter and took over the leader?s jersey of Jasper Philipsen.

Following the decision of several Dutch mayors to stop the BinckBank Tour from passing through the Netherlands, the third stage of the BinckBank Tour was thoroughly reconfigured. On Thursday the riders faced a 157 kilometre stage with seven laps on a local course around Aalter.

Despite the rain the race was animated from the start with a breakaway of five riders. Dutchmen Oscar Riesebeek and Pim Ligthart were joined by Belgians Kenneth Van Rooy and Jonas Rickaert and France's Adrien Petit. Belgian champion Dries De Bondt and Mike Teunissen also tried to bridge the gap, but were caught soon after.

In the peloton the sprinters' teams calmly controlled the gap to the leaders, which never exceeded three minutes.

A valiant Rickaert tried to stay out in front alone, taking the nine bonification seconds in the BinckBank Golden Kilometre, but was the last man to be caught by the chasing pack with 2.5 kilometres to go.

In the sprint Pascal Ackermann was perfectly placed, but just like in Ardooie the German sprinter didn't manage to hang on for the win. The Bora-Hansgrohe rider was passed by leader Jasper Philipsen, who was then caught at the line by former world champion Mads Pedersen.