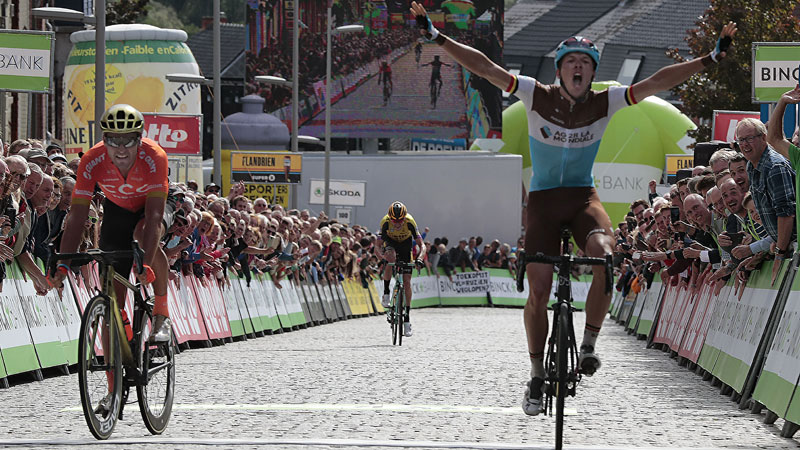 The final stage of the BinckBank Tour will finish on the Vesten in Geraardsbergen on Sunday 6th September. In 2021 and 2022, the Belgian-Dutch WorldTour-stage race will also finish in the East Flemish town.

As is customary, classic one-day race cyclists can take a shot at final victory in the BinckBank Tour. The final stage in the Flemish Ardennes with its culmination in Geraardsbergen will give the cobblestone specialists and punchers a great opportunity to hit that final note. In recent years, arrival in Geraardsbergen has become a classic element of the BinckBank Tour, this year will be the ninth time. Once again, the Vesten set the scene for the final stage, a stage that also features passages over the Muur van Geraardsbergen and Bosberg.

"Thanks to this cooperation, we are meeting one of our targets of including recognisable locations from the world of cycling in our stages. The Muur is the legendary location par excellence for cycling in Flanders and that makes us very happy of course", says race director Rob Discart of Golazo Sports.

Last year, Oliver Naesen beat Greg Van Avermaet, his training partner from the East Flemish group "De Parelvissers" in a tense sprint uphill. Laurens De Plus grabbed the leader's jersey off Tim Wellens in extremis. In 2018, Van Avermaet also came second, then he finished behind Michael Matthews. In 2014, the man from Waasland did manage to win in Geraardsbergen, after a duel with Tom Dumoulin. Other names that grabbed a win after a thrilling final on the Vesten are Jasper Stuyven, Edvald Boasson Hagen, Manuel Quinziato, Zdenek Stybar and Alessandro Ballan. A spectacle is always guaranteed in Geraardsbergen!