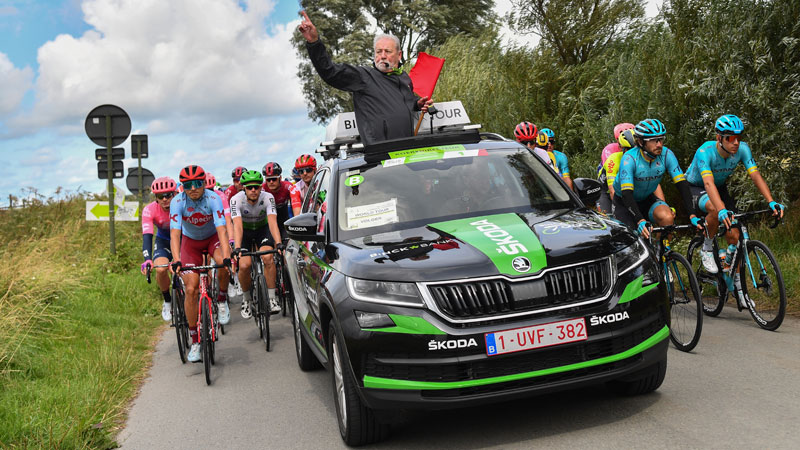 In 2020, the start of the BinckBank Tour will be in the far north of the Netherlands. The city Dokkum, one of the eleven cities of Friesland and part of the municipality Noardeast-Fryslân, will be the venue for both the start and the finish of the first stage and of the team presentation on Sunday night.

The only multi-day UCI WorldTour competition of the Netherlands and Belgium will start on Monday 31st August. The first stage will cover a distance of about 170 km, will go through North-East Fryslân and will call in at several cities and towns in the area, in addition to the city of Dokkum. If you would like to get a good overview of all the teams and riders, you can also head to the Admiralty of Dokkum on Sunday 30th August for the presentation of the teams. The municipality works together with the organisation of the Admiraliteitsdagen, a maritime and music festival, which will be held at the same time.

Sander de Rouwe, representative of the Provincial Executive, is excited. "We consider the BinckBank Tour as a perfect opportunity to promote Fryslân as a sports and cycling province. Once again, we are looking forward to the arrival of the professional peloton, this time on the roads of North-East Friesland."

Mayor Hayo Apotheker is counting on this event drawing thousands of visitors to the most northern city in the Elfstedentocht (ice skating marathon). He is also expecting to see many enthusiastic sports fans along the route. "Dokkum and the rest of North-East Fryslân will be the place to be that weekend. It will undoubtedly be quite an experience to be part of it".

Race director Rob Discart: "The BinckBank Tour has started in Friesland several times before. We always receive a warm welcome there, both from the towns and the public. On many previous occasions, the Friesians have shown that they are not just fans of skating, but also of cycling. The combination with the other activities that weekend in Dokkum, promises to make the Grand Départ one big cycling party."

In the following days, the BinckBank Tour will cross the centre and south of the Netherlands on its way to Belgium. The 16th edition of the BinckBank Tour finishes on Sunday 6th September. The route will offer the peloton opportunities for sprints, hill climb and cobble road stages as well as a time trial. It remains to be the tour par excellence for the classic rider!

BinckBank Tour 2020, through the Netherlands and Belgium from 30th August until 6th September.